Storytelling is verbally sharing a narrative, whether true or imagined. It began as an oral tradition; stories were committed to memory and passed down through the generations, until the written word came along and captured them in a new form.

Storytelling is essentially what happens at Bettakultcha, although it wasn’t necessarily what I was expecting. If I hear the words ‘PowerPoint presentation’ there is a part of my
brain that automatically twitches and then turns off. I feel like a rebellious teenager at school who wants to bunk off and go down the local caff for a mug of builders tea and a fag, (not that I ever did that, of course). This was how I felt when I first heard about the idea of Bettakultcha.

Bettakultcha is a monthly night in Leeds comprising of a series of presentations: 20 slides, 15 seconds each, five minutes to present, and NO PITCHES. Hmmm. Well, if they only last 5 minutes at least the end is always in sight, and thank GOD you can bring your own booze(!!). Those were my thoughts as I arrived for my first event, back in September.

The thing is, I was totally wrong. Each presentation went by in a flash, and the topics were so varied and the speakers so entertaining, I was sad when most of them ended. (I say most because as with all things, you do get the occasional dud.) The idea of a time
limit to each slide is a God-send, because when speakers get carried away, or stuck on a
point, the change in slides kicks them out of their tangle and moves them forward.

I think the term ‘presentation’ is an unfair one for what actually happens at these events. Bettakultcha drags people away from their goggle boxes and entertains them in a new way that has it’s roots in a very old tradition; people telling us stories, fact or fiction.

Last night was the 8th Bettakultcha in Leeds, and as always it was highly entertaining. Topics covered included viral marketing, Iceland (the country, not the shop!), pinhole photography, the history of drag queens, North Korea and thoughts on magic and conspiracy theories. The top presentation of the night has to go to Janey Rodgers (@Janeydodge) for her inspired take on Star Wars as a Mills & Boon Story! Amazing. The presentation was delivered with wit and flair, featuring Luke as ’emo boy’ and Leia’s bizarre bikini – I’ll never watch the films in the same way again.

You can see some of the past presentations on Bettakulture’s website, and last night’s should be up in a few days. Good news if you live near Bradford – Bettakultcha is launching there on 27th April! 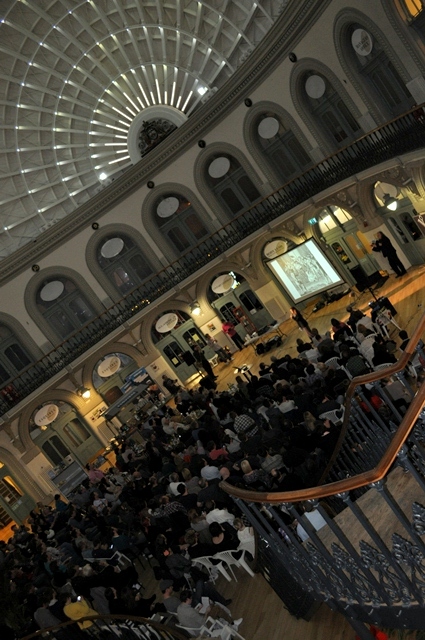 One reply on “FEATURE: Bettakultcha – storytelling in the 21st century”

[…] Ivor Tymchak, (a talented caricature artist and co-creater of Bettakultcha – see my earlier post). On third was Nigel Vardy who has an awe inspiring attitude and an incredible tale to tell. He […]