When I was first told about the concept of cinema viewings especially for people to bring babies to, I thought the idea was somewhat flawed. You know how the person behind you with the sweet bag crinkling all the way through a film winds you up? Or the relentless texter? Well I thought a room full of babies would be a leap and bound straight to the deep end of the scale of annoyance.

However, 6 months later, and having only seen one film in that time, I was desperate to see something new and the thought of being allowed in the cinema suddenly became very exciting.

The Hyde Park Picture House is a beautiful old cinema in Leeds and has baby screenings every two weeks or so. My first visit was rather stressful as Emilia was in a particularly bad mood. They are rare for her, but she does like to do them properly. I saw The Descendants, which to me, even through the tantrums etc. seemed rather slow, and an awfully long way round to tell a simple story. I kept thinking some new twist was going to develop the plot, but no. You’ll guess how the story goes in the first 5 minutes. I didn’t really care that the film wasn’t great though, it was just a joy to be there, and to not have to worry that Emilia was shouting her head off, or that I had to change her on the floor and walk her up and down etc. Everyone there was in the same boat. And understood. 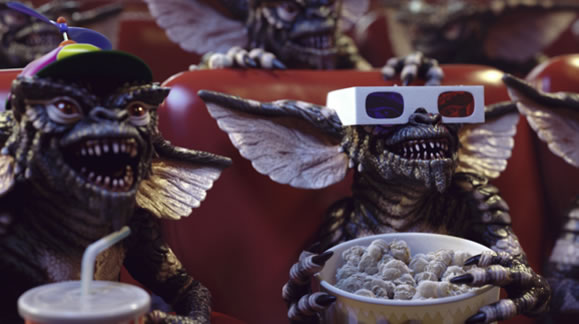 Bring Your Own Baby is a little like that scene from The Gremlins when they take over the cinema. It is certainly not recommended for non parents, or people whose senses haven’t been dulled to distracting and at times piercing baby noises… But for me, it’s brilliant. A great way to pretend that I can still go to the cinema like a normal person.