A friend of mine recently got in touch to say that his band was releasing a new album. I’d never heard the Dear Friends’ music before, but I said I’d take a listen. There’s always a bit of pressure to like music when you know the people involved, but luckily for me, it really wasn’t hard to like this album. 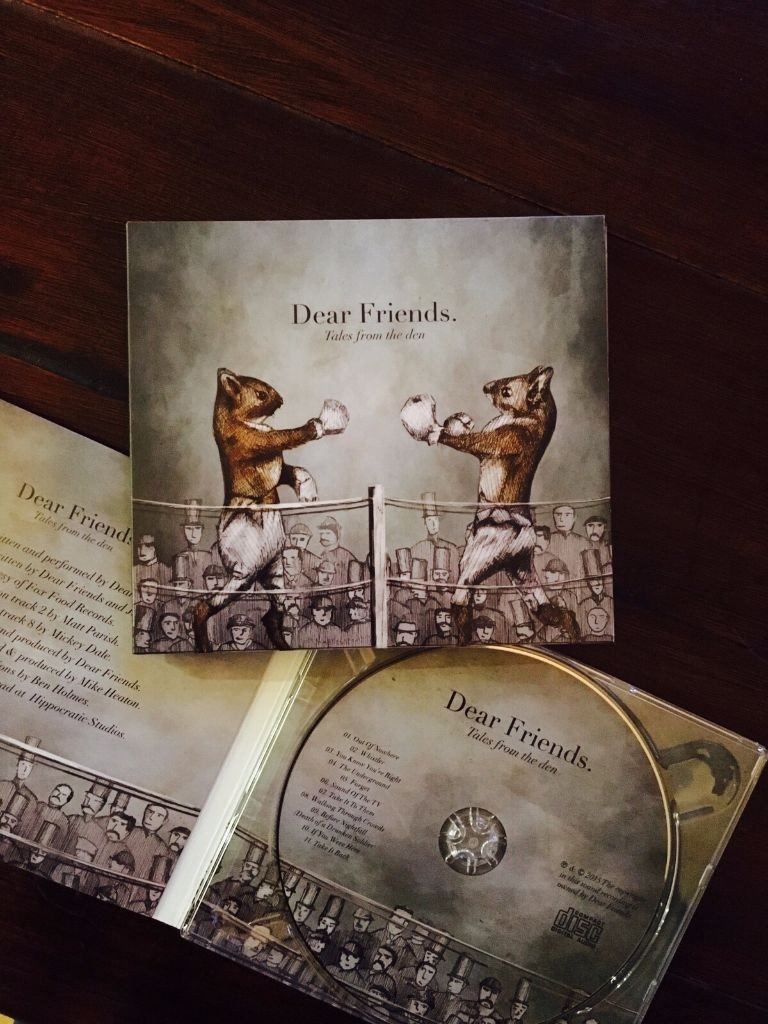 The music is acoustic, and folksy, which is my kind of style. There are emotional songs, which build and build, and that have lovely harmonies. Also, there’s some beautiful piano tinkling it’s way through the tracks, which always makes me happy. Oh, and in The Whistler, there’s a HORN SECTION. The joy! Every band should have these two things in my opinion. The instruments are shown off well in Dear Friends’ single, The Whistler. It makes for a great single as the skills of the band are portrayed, but it’s also a foot tapper that builds up perfectly.

Their songs do have a tendency to slowly build into a crescendo, which works for their style of music, and even on just the second listen I was humming along with some of them them. The vocals are strong, and layered. The Underground is a good example of this, with the peak of the song having a slight Coldplay Fix You vibe to it, but there’s nothing wrong with that.

Out of Nowhere is the opening track to Tales from the Den, and it’s a lovely introduction to the album. This song is so well paced, and layered. The melodic piano and guitar lines seem to swell and fall like the ocean, and you find yourself following them along with ease.

Take It To Them livens things up a bit; it’s a really catchy song, and definitely one of my favourites. It’s a little bit reminiscent of Kaiser Chiefs back in the day, but more on the folky side. Another great track is Walking Through Crowds. Mike Heaton and Micky Dale from Embrace helped to produce this one, and it’s got a fantastic ending kind of latched on to the song – you think it might be ending, but there’s an extra treat instead.

Dear Friends is clearly made up of a talented bunch of lads. They launched their new album in January 2016 at The Wardrobe, and Radio 2 is already blasting their single Whistler out across the waves. Good things could happen for this band, and I really hope so. They’ve put a lot of work, time and resources into this album, and they’re talented folks who care about what they’re doing.

To keep up to date with the band, find them on Facebook. They have lots of gigs coming up, including appearing at Live at Leeds in April.

Tales from the Den by Dear Friends is available on iTunes, Amazon and Spotify.